Nothing brings the family together quite like a great meal. Algeria possesses a rich culture that has been influenced by ethnic groups from all around the world. From their art to their cuisine, foreign influences can be seen in Algerian culture through and through.

Are you planning a trip to Algeria soon? Or are you planning on cooking up an exotic meal for the family? For either situation, knowledge of some amazing recipes will do wonders. We’ve prepared a list of 5 traditional dishes from Algeria that are sure to amaze friends and family alike. 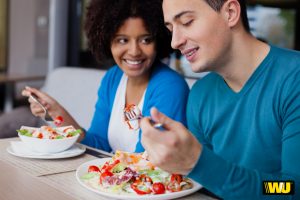 Start your day off right with Chakchouka, a traditional Algerian dish that’s mainly eaten for breakfast. This dish is simple to make and can be completed in around 20 minutes. Traditionally, the main components in Chakchouka include sautéed onions, tomatoes and various spices topped with a few eggs. This meal goes great with a side of bread, pita or rice to soak up the sauces, so try it out!

Often considered the national dish of Algeria, Couscous is a perfect complement to any meal. This dish is composed of small pellets of steamed semolina topped with meat, vegetables, and various spices. In Algeria, the most popular meat and vegetable accompaniments for this meal include chicken, carrots and chickpeas. Although a rather simple dish, Couscous offers considerable freedom in its selection of ingredients. Try personalizing your own recipe! 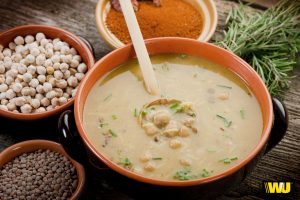 Are you in the mood for something light to fill your stomach? Harira is a traditional North African soup possessing a rich and hearty flavor. Recipes for this dish vary from region to region but in Algeria, Harira is often composed of lamb simmered with vegetables, spices and herbs. Try cooking up a pot of Harira on a cold day to surprise your family!

Start any event off on a good note with Mechoui, a traditional North African dish. The name Mechoui comes from an Arabic word meaning “roast on a fire,” and like its namesake, the meal is prepared in much the same way. This dish is composed of meat spiced and roasted over a fire and is mainly prepared for large gatherings. In the Algerian variation, the meat is roasted on a spit giving the meat a crispy and delicious flavor.

Are you in the mood for something sweet to eat? Try eating some Makroudh, a traditional Algerian dessert. This pastry is composed of a date or almond stuffing with deep fried semolina dipped in honey. Makroudh also goes great with coffee in the morning so the next chance you get, take the time to enjoy a morning snack before rushing off to work.

Want to try some new and exotic dishes? Drawing influences from Berber, Arab and other European cultures, Algerian cuisine is sure to present you with a taste you’ll never forget. Try one of these five dishes from Algeria with your family for an experience you won’t regret!