Book review: A Good Provider Is One Who Leaves

So says author Jason DeParle, in the prologue of his new book “A Good Provider Is One Who Leaves,” a deeply reported personal story of an extended Filipino family who, over three decades, go their separate ways all over the world to find economic opportunity for themselves and to share it with the loved ones they’ve left behind. 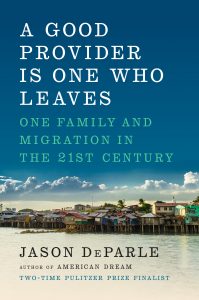 Global migration is a huge topic, one that we at Western Union are more familiar with than most. But most people, especially in the U.S., know relatively little about it. Despite the attention paid to it (mostly negative, much even systematically distorted) by some journalists and politicians, and despite the major role immigrants play in our economy, most of us rarely think about the issue—either on the individual scale, of one person or one family, or on the global scale, of hundreds of millions of workers and economies all over the world. This book tells both stories in keen detail.

DeParle, now a New York Times reporter, met Tita Portagana Comodas in the Manila shantytown of Leveriza in 1987. As a young journalist writing about global poverty, DeParle went to Leveriza looking for a family to live with. Tita Comodas, a housewife who cooked and cleaned all day for her family, with a sideline reselling a few thousand eggs a week at the local co-op, reluctantly took him in. Her husband, Emet, left the family behind to work cleaning pools in the Middle East, where he could make many times the income available to him at home. Sporadically he tries to return to his family, but for 20 years is drawn away again and again by the irresistible lure of higher pay and the opportunity to afford schooling and a better lifestyle for his family. Eventually, his hardworking daughter, Rosalie, graduates from nursing school and emigrates herself, first to the Middle East and then to the U.S.

DeParle remains close to the family more than 30 years later, and skillfully uses three generations of Comodases to illustrate the far broader forces driving and shaping global migration, from the familiar search for economic opportunity by individuals to the ambitious national labor-export program the Philippines created in the 1960s to boost income from foreign remittances. Also discussed is the more recent feminization of migration, technology’s enabling of migration and the maintenance of family networks overseas, and the irreplaceable role foreign remittances play in the economies of many countries.

Notably, everyone DeParle follows closely on their global journeys migrates legally. Rosalie ends up in the U.S. with a Green Card, because her skills are wanted and needed here—even if the reception she receives isn’t always a welcoming one. The book nicely shows how the trials faced by legal immigrants, with marketable skills, are too often ignored entirely in the conversation and controversy surrounding illegal immigration around the world.

What makes the book perhaps most compelling for anyone looking for insights into the daily lives and struggles of migrants are the details: descriptions of slice-of-Manila Filipino neighborhoods in the U.S. and Riyadh; the way social media becomes a crucial lifeline for migrants and their families, rather than simply an entertainment or distraction; how often migrants unexpectedly find common cause with their native-born neighbors in the economic underclass of their host countries. Books that combine such illuminating, personal detail with clear explanations of world-shaping macroeconomic forces are few and far between.

A GOOD PROVIDER IS ONE WHO LEAVES
One Family and Migration in the 21st Century
By Jason DeParle
382 pp. Viking. $28.