Western Union: Transforming along with the markets we serve

In times of economic disruption, it’s exciting to be a business providing a service people want and need. It’s even better to be a highly respected global player, with an unrivalled brand presence and technology infrastructure, well-positioned in a growing market.

I want to share a few points I recently made during our 2019 Investor Day. They have to do with the enviable position in which we have placed ourselves as a company: with a steadily growing and highly profitable core business, built on a state-of-the-art digital and physical network, poised on the leading edge of a global revolution in the way people and businesses move money and make payments.

According to the World Bank, the global market for remittances is $700 Billion annually and growing. This is driven by a worldwide population of 272 million international migrants. These people, crossing borders everywhere in search of economic opportunity, send money back to the people they’ve left behind: money that pays for housing, health care and education; increases individual savings; invests in property and even supports small businesses back home.

That money, the World Bank says, now surpasses the total Foreign Direct Investment (FDI) in emerging economies worldwide. It is, and is likely to remain, perhaps the most potent global economic development force of our time.

We at Western Union are grateful to our customers, who have made us such a huge part of this movement of money across borders. In truth, however, we are also more than a little proud of the hard work our employees and Retail and Digital Agents have done, over decades, to create the physical and digital pathways all this money takes to get where it’s needed.

The physical part is familiar to many: We have more than 550,000 Western Union, Vigo, and Orlandi Valuta agent locations in 200 countries and territories where people can send and receive money in person. What’s not as easy to see is our digital footprint, connecting people with smartphones or computer access to a network of billions of bank accounts and wallets.

Our growth in digital cross-border money movement over the past several years has been impressive: 25 percent per year since 2010. We now serve more than 75 countries with WU.com or the WU app, sending money to more than 200 countries and territories. As we expand, our services become more accessible and more convenient to people in new places.

And we reach those people and places with the help of respected and innovative companies, through which we offer co-branded services. By means of example, the Western Union® network powers consumer money movement all over the world with entities such as Kroger in the U.S., TD Bank in Canada and UK Post.

This is why we say our core business is not just as resilient as ever, but poised for growth: In 2018, we posted $1.1 Billion in profit on $5.6 Billion in revenue. Our GAAP operating margins were a healthy 19 percent. We had $1.4 Billion in cash on hand and a low $3.2 Billion in debt as of September 30. As of 2018, over the course of the preceding three years, we returned $2.3 Billion in value to our shareholders through share repurchases and dividends.

Our latest financial targets reflect both our longstanding stability and the expected impacts of new business. We expect low double-digit EPS for the next three years, as well as an operating margin of 23 percent by 2022. 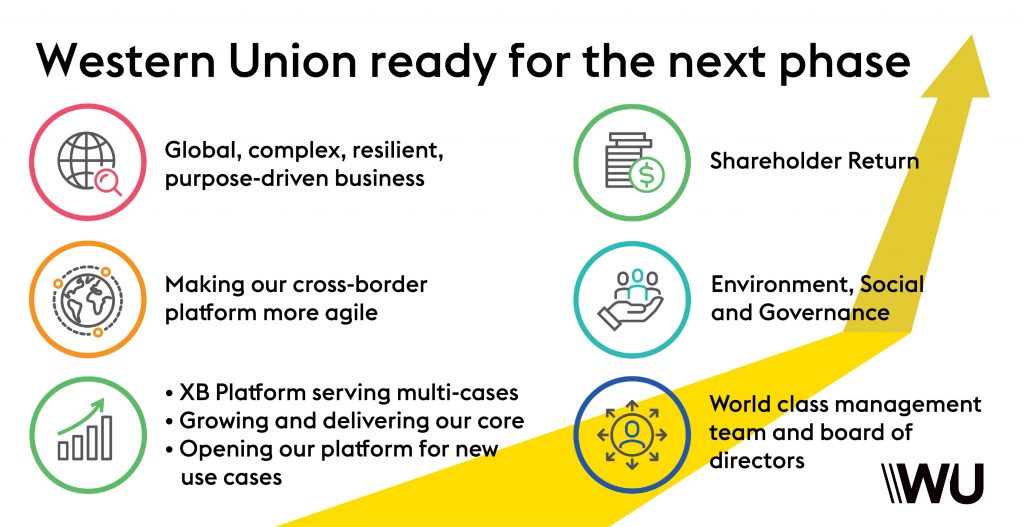 But this is only the beginning. We are building out our network, preparing for much more. Besides our existing co-branded business, we are opening our platform to power other brands to move money and make payments. It is a decisive step towards a new incremental growth opportunity.

Consumers in 20 countries, for example, now can use Western Union services to pay for purchases on Amazon, filling up their cart and then paying, in local currency, at a nearby Western Union agent location. If they need a refund on an Amazon purchase, they can pick that up—in local currency, of course—at their local agent as well.

We are also expanding into white-label services* for financial companies such as Sberbank in Russia, STC Pay in Saudi Arabia and Kyodai in Japan. It takes a payment network the size of Western Union’s, combined with our unparalleled global settlement and compliance capabilities, to make this happen. Moving money across borders, at this scale and speed, is nothing short of revolutionary.

And, as befits a global business revolution, the potential rewards are staggering: Oxford Economics estimates the 2019 market for moving money across borders for consumers and businesses to be more than $23 trillion.

More than $23 trillion is nearly a third of global GDP**, ready to move across borders, among every combination of businesses and people, just as Western Union has spent decades building a world-leading combination of physical and digital assets to enable that movement.

This moment was made for us: From our earliest days 168 years ago, we have been at our best at times of business and technological upheaval. From the telegraph and telegram, through satellite communications and the movement of money in minutes, we forged our culture as a company by creating new technologies, combining them with older ones, then leaving the oldest behind when it was time to move on—driven first and foremost by listening as our customers tell us what they need.

Hikmet Ersek: The trust of our customers is the measure of our success – and the fou...

How MIT React is Creating Opportunities for Refugees