As the humanitarian situation in Afghanistan continues to deteriorate, with large numbers of civilian casualties, hundreds of thousands of people displaced and thousands more suffering from food shortages and unsafe living conditions, the Western Union Foundation is working with the American Red Cross to provide immediate humanitarian assistance and emergency medical aid for refugees.

On August 15, the Taliban took control of Kabul, Afghanistan’s capital, escalating the rate at which people are fleeing their homes in Afghanistan and adding to the six million who already have been displaced in recent years. The U.N refugee agency reports that nearly 250,000 Afghans— 80% of whom are women and children—have fled their homes since the end of May. In the past weeks alone, tens of thousands have been evacuated from the country. The U.S. is preparing to welcome at least 40,000 evacuees.

With support from the Western Union Foundation, the American Red Cross will provide direct relief and basic needs, such as food, water, medical aid, emotional and mental health support to Afghan people and refugees as they are being processed for asylum and successful and safe integration into the U.S. 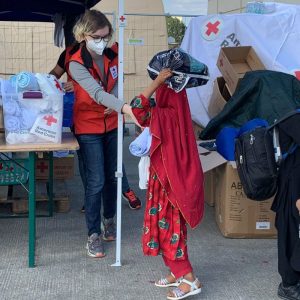 The Foundation has pledged $250,000 to American Red Cross International Services efforts to offer immediate and essential support for Afghan refugees, including food, water and medical and mental health support, as well as temporary shelter, while they await processing in the U.S. It also will support family reconnection through Restoring Family Links, a program designed to reconnect families separated during crisis. An additional funding of $250,000 will be directed for ongoing efforts throughout 2022 to help Afghan evacuees integrate into global economies.

Photos by the American Red Cross.

How Consumer Preferences Are Changing The Global Payment Landscape