World Youth Skills Day is observed annually on July 15, to raise awareness about the importance of technical, vocational education and training, and the development of other skills for employment, decent work, and entrepreneurship. This year’s World Youth Skills Day aims to celebrate the resilience and creativity of youth through the COVID-19 crisis. Since 2001, the Western Union Foundation has partnered with multiple organizations and launched numerous initiatives to help young people use their voices to advocate for others and gain the skills needed to succeed in today’s technology-driven global economy. From supporting young refugees and immigrants with partners like the Whitaker Peace & Development Initiative and the Watson Institute to providing scholarships to young brilliant and talented minds through the WU Scholars Program, all with a commitment to help meet global development goals for education. Even during times of crisis, the Foundation works with partners on the ground in communities to help make sure young people do not lose access to education. For example, to support communities affected by the Kerala Flooding in India, the Foundation worked with United Way India to restore schools so children could continue their education.

On this World Youth Skills Day, the Foundation is celebrating the resilience of those young people who have made it a goal to make the world a better place every day. 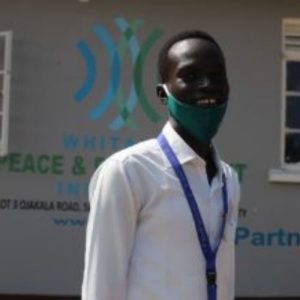 The Western Union Foundation met Ajang Nathaniel through its work with the Whitaker Peace & Development Initiative (WPDI) in Uganda, and as a mentee in our Mentorship Beyond Borders program. Nathaniel is a South Sudanese refugee living at the Kiryandongo Refugee Settlement. He fled his country during the armed conflict eight years ago in 2013 and sometimes, Nathaniel recalls the negative things he had to endure to survive, like grazing cattle while carrying a gun in the bush back in his home country, the denial to his education and the distance he covered barefoot to escape during war. Knowing the pain and trauma that these experiences can engender, he is on a mission to promote peace and create change by demolishing the negative ideologies in the youths. At WPDI, Nathaniel is a trainer in peacebuilding and conflict resolution, as well as in business entrepreneurship at the Kiryandongo Refugee Settlement. So far, Nathaniel has affected 233 refugees, especially women and other youths, in areas like Conflict Resolution Education and Business & Entrepreneurship. He envisages using his skills to create positive transformation for long as he can speak. 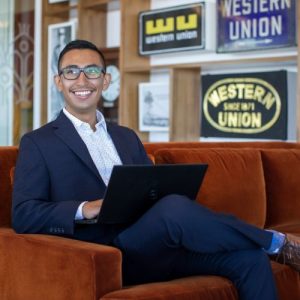 When the Foundation announced its WU Scholars program to help launch aspiring and inspirational young people on their journey to success, Oliver was one of the first applicants to be accepted. Oliver’s story is no different than those of many high school youth around the world. He wanted to become a sports hero and college was not on his radar. It took him a trip with his high school class to the Western Union headquarters in Denver, Colorado- where he learned about the Western Union Foundation’s scholarship opportunities, to realize his purpose in life. As a first-generation immigrant, Oliver was the first person in his family to speak English and has always received tremendous support from his family in his education. He is finishing his degree in accounting, business & real estate and his drive landed him an internship in Western Union’s Internal Audit Department. Oliver’s experience and college education are creating generational change for his family. Younger sisters now aspire to follow in their big brother’s footsteps. And a family who once saw college as out of reach now recognizes that higher education is achievable. 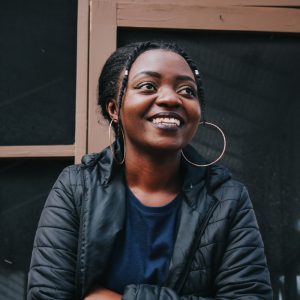 Claudine’s skillset is extremely wide and various, so in a nutshell, she is a Watson Institute alumnus, a scholar, speaks six languages, writes poetry, loves to dance, is an avid gardener, a founder and a survivor. Claudine became an orphan as a very young child and made her way to the Kyangwali Refugee camp in Uganda after fleeing her home country, the Democratic Republic of Congo. That experience helped her develop a strong passion for helping young women to be the best version of themselves and a vision of building peace in her community. Years after being away from her homeland, Claudine returned with an idea called ‘Nguva Ya Africa’ which translates to ‘Power of Africa’ because she believes young people, especially young women, “if given tools and skills needed can bring the peace that wasn’t there”. Claudine is an invaluable asset to her community, both at home and abroad and we are grateful for the work she is doing. 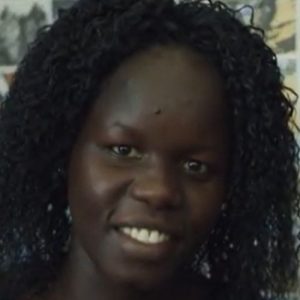 Ajwok Mary Valentino is a Journalism and Communications student at Makere University in Uganda and a WPDI trainer in conflict resolution, peacebuilding, and entrepreneurship at the Kiryandongo refugee camp. In 2018, the Western Union Foundation awarded Mary the Moving Money for Better Scholarship, supporting her trip to the distinguished One Young World Summit during which she continued her advocacy, speaking with young leaders from across the world to discuss solutions to today’s most pressing issues. Mary now represents Western Union and WPDI as a One Young World Ambassador. However, her background is filled with chaotic and traumatizing events. As a child, she found herself running away with her little brother on her back from a South Sudan that was getting consumed day by day by a brutal civil war. Along with some other 100,000 refugees and against all odds, Mary found shelter, healthcare, and education at the Kiryandongo Refugee Camp in Northern Uganda. She then quickly realized that her survival was not without purpose and began advocating for refugees just like herself. 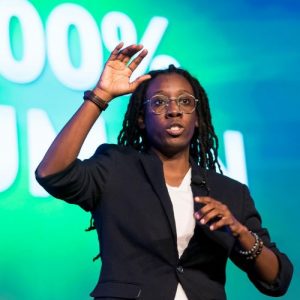 Donnya is a Barbados-born LGBTQ Advocate who helped break barriers by working with others on the basis of commonality versus differences. The Foundation met Donnya through its nonprofit partner Watson Institute, where zi was provided the tools, network, and mindset to accelerate their career. Moving from Barbados to the United States, Donnya was not sure what to expect but had a negative perception to overcome.  What zi found though was a welcoming environment and people that despite perception made them feel a part of the community. Zi’s advocacy continues, and their advice for other advocates is to focus on building communities and people, versus focusing on what we don’t like about society.

Since the COVID-19 outbreak, the Western Union Foundation has made it its priority to empower youth around the world through economic recovery by providing scholarships to international students, continuing efforts in workforce training, and providing small businesses with the tools to sustain and grow.