My journey started in 2016, when I decided to start studying Civil Engineering which at the time was my professional career aspiration. I joined Western Union because I needed to earn some money to pay for my studies and I knew a few people already working at Western Union. They told me that it was a great company with a lot of opportunities to grow, and they were hiring Anti Money Laundering associates when I needed a job. I applied for the role and was hired to the position in Global Sanctions and Interdiction department. 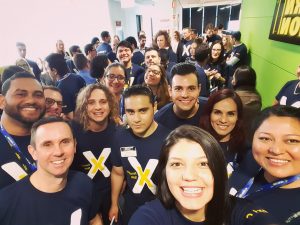 When I started my new role as an associate, I was surprised to learn that neither age nor gender was an impediment for you to grow at Western Union; what you needed was a positive attitude, and a willingness to learn and help others. I committed myself to grow not only on a personal level but at a professional one. My first goal at the company was to become an SME in the department. By being an SME, I was sure that at some point my performance would get noticed and I would be called for important projects to gain not only experience, but also knowledge and exposure to upper management.

After six months in the role I became an SME and indeed was called for this important project about ‘Lean’ called the WU WAY. While I did not know what to expect, I wanted to learn new things and I accepted to start the new journey. When the project started I was nervous and anxious because I was still unsure about what I was going to do, but in the kickoff meeting I knew that accepting this opportunity was the best thing I could’ve done. Nicole Zimmermann led the meeting and as soon as she started speaking she got us all engaged. She was so excited and motivated about starting the project that her words and speech inspired not only me, but everyone that was in that room to give our best for this to be a successful project.

Throughout the project, we were trained in every aspect you can think of, not only related to the job but also related to personal development: coaching sessions, 1:1s, trainings about lean, continuous improvement, and many more. Western Union even brought McKinsey contractors in to teach us the ‘Core of Lean’ and how to apply lean tools (Product Service System, process confirmation sessions, standard work creation, etc.). They made sure that we all had the necessary tools and skills to succeed not only in the project but in the company. All we needed to do was give that extra step in applying the knowledge we acquired to be successful in the project. During the project I realized that Western Union was more than a simple job to pay for my studies, I was already building my professional career without me noticing it. I decided to switch from Civil to Industrial Engineering to learn even more about continuous improvement and have additional tools and knowledge for growth. I wanted to start to give back to the company that was building my career and has given me a lot more than just a job. One of the best feelings was to know that as a team, we were making a positive impact to our customers and it felt so good. 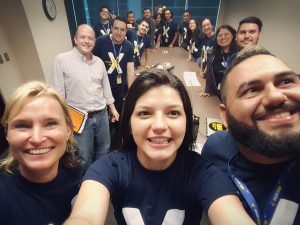 The person I am today and the position that I have is thanks to the WU Way project and its leaders. It opened our minds and made us think outside the box in every single aspect of life. I am a Business Analyst part of the Robotics Process Automation team and in about six months I will be getting my bachelor’s degree in Industrial Engineering thanks to all the sacrifice and the WU Way project.

I can say that I got into this role because of the WU Way and Nicole, who gave me the necessary skills, guidance and opportunity to join that amazing team. The leaders always kept us going for more and inspired us every day; their guidance and coaching was key to succeed in the project.

Nicole did a tremendous job leading the team. She was able to make the team more like a family. The team was from the Dominican Republic, Mexico, Costa Rica, and the United States; the culture barrier didn’t matter, we all got along, treated ourselves the same and enjoyed every single day of the project. What really surprised me about Nicole was her humbleness, positive attitude, sense of urgency and the way she communicated with us, always giving us the opportunity to provide an opinion and make an impact in something important, to me she is a role model.

Innovation in the time of COVID: S&P 500 companies disrupt from within

Looking at the future of migration: a conversation with Jason DeParle