Chief Executive Officer Hikmet Ersek received the prestigious Global Economy Prize, awarded by the Kiel Institute for the World Economy, on June 23. The prize is awarded annually to business, political and academic leaders who “have proposed creative, 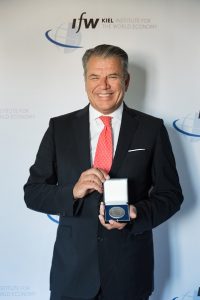 pathbreaking initiatives to deal with globalization.”

This year’s other awardees were Dr. Wolfgang Schäuble, president of the German Bundestag, and Massachusetts Institute of Technology economist Daron Acemoglu, co-author of the influential and best-selling book “Why Nations Fail: The Origins of Power, Prosperity, and Poverty.” Past winners of the award include former German President Horst Kohler, former General Electric CEO Jeffrey Immelt, and Mikhail Gorbachev.

The ceremony started on Saturday with a meeting of the prize winners followed by a speaker dinner. The themes covered were inequality, globalization and migration, and the contribution that each of the three prize winners were making in these fields. On Sunday morning the formal ceremony took place in Kiel town hall before a collection of German politicians and invited guests. Speeches and laudations on these topics were covered and Hikmet was interviewed for German TV.

In his speech, about the prospects for globalism in a time of trade wars and increased nationalism, Hikmet offered a message of forceful assurance. “As responsible leaders, we must commit to shaping this new globalism into a truly equitable globalism, one dedicated to inclusion as a core value,” he said. He cited Western Union’s partnership with Amazon as the kind of inclusive innovation that brings the benefits of online commerce to communities that have previously been left out because their economies still rely on cash.

Born in Turkey, a citizen of Austria and resident of the United States, Hikmet draws on his international background to speak out publicly for the rights of migrants and refugees worldwide. His unabashed stance as a voice for under-represented populations was cited by the Global Economy Prize jury in their announcement of his award.