Culinary diversity of India is one of its greatest treasures. The diversity in food can be attributed to the diverse geography and climate of the subcontinent. The wealth of flavours of Indian food can be relished in its street food, too.

Street food in India is popular and pocket friendly. Some of these dishes have become a part of regular restaurant menus too, though they taste the best when eaten from stalls or counters along the roadsides.

Below are some delicious street foods from all over India that foodies travelling to India must try:

1. Gol Gappe: It is widely popular across India and is known by several names in different states across the country. Known as Panipuri in Maharashtra, Gujarat, Madhya Pradesh, Karnataka and Tamil Nadu; Phuchka in Bihar, Jharkhand and West Bengal; Gol Gappe in New Delhi, Punjab, Jammu & Kashmir, Haryana, Bihar, Madhya Pradesh and Himachal Pradesh; Paani ke Bataashe in parts of Uttar Pradesh; Gup Chup in Odisha, Hyderabad and South Jharkhand, this spicy and tangy savoury dish can be enjoyed anywhere in India. 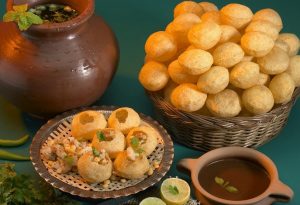 These water balls are my favourite, they consist of a crispy fried sphere which is poked and stuffed with a spicy mixture of tamarind chutney, chili, chaat masala, potato, onion, chickpeas. These are then filled with flavoured water and popped right into the mouth.

2. Vada pav: This dish is a native of Maharashtra and is almost the staple for those living in Mumbai. It is the Indian version of a burger, prepared by placing a deep-fried mashed potato fritter (vada) inside a sliced bread bun (pav). Green chillies and spicy chutneys are served as condiments. It is a spicy and filling snack, which is pocket friendly and is enjoyed across all parts of India. 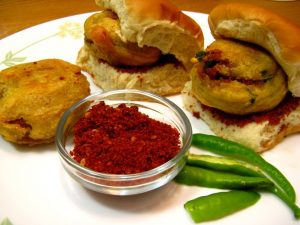 3. Poha Jalebi: It is the staple breakfast of Madhya Pradesh and you can enjoy a delectable plate of it in Indore. Poha is a light and nutritious snack made of flakes of flattened or beaten rice that is cooked with onions, potatoes, curry leaves, turmeric and spices. It is garnished with sev (namkeen), coriander and topped off with lemon juice. Jalebi is a dessert and is popular all-over South Asia and the Middle East. It is made by deep-frying maida batter (plain flour or all-purpose flour) in pretzel or circular shapes, which are then soaked in sugar syrup. Poha Jalebi is served as a combination and a plate of it can be defined as a perfect burst of flavours. The delectable mix of sweet and salty flavours and favouritism of the dish is such that The Micro, Small and Medium Enterprises (MSME) Development Institute in Indore is helping the manufacturers’ and sellers’ body in seeking the Geographical Indication tag for the dish. 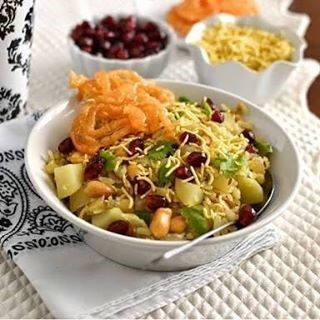 4. Bhelpuri: It is a savoury snack and belongs to the chaat It is made of puffed rice, onion, vegetables, coriander, peanuts, namkeen, spices, lemon juice and a tangy tamarind sauce. The recipe has been reinvented across almost all states of the country and has been modified to suit the local palette. The Bengali variant of bhelpuri is made by adding oil and chilli to the other ingredients, called jhalmuri (meaning “spicy puffed rice”). Mysore variant of bhelpuri is known as churumuri or churmuri in Mangalore is a similar dish of puffed rice mixed with carrot, tomato, spices, jaggery along with coriander leaves. 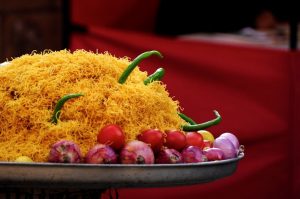 5. Pav Bhaji: Pav bhaji is a Maharashtrian fast food dish consisting of a spiced mixture of mashed vegetables in a thick gravy, garnished with chopped onions, coriander and lemon juice, served hot with a soft string buns (pav) which have been dipped in butter. This perfect blend of a myriad variety of veggies along with exotic mix of spices is a favourite as it is flavourful and pocket-friendly too. 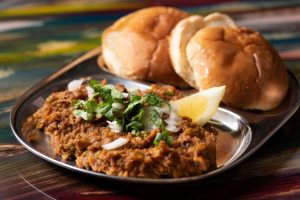 6. Paddu/ Appe: It is a popular finger food in southern states of India such as Tamil Nadu, Karnataka, Telangana, Andhra Pradesh. Paddu’s are smaller versions of Dosa with a slightly sour taste. These are also known as ponganalu or paniyaram and are made of a batter which is made of soaked black lentils and rice, in a mould. They taste amazing with filter coffee and are served with coconut chutney. 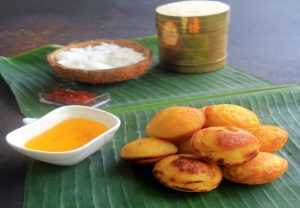 Akancha creates content on technology, health, lifestyle, environment and sustainability matters. Her contribution for the Tagline for the promotion of Geographical Indicators of India has been awarded by the Ministry of Commerce and Industry, Government of India. A qualified HR & Marketing professional, she currently works independently, writing out her mind every day.