Getting Around By Rytis Cekauskas October 8, 2019

Most people know Western Union as the company that helps send and receive money around the world. But did you know that Western Union has been an industry leader in connecting people for over 145 years? Many different technologies Western Union helped develop are things you probably couldn’t imagine life without today. So get ready to be surprised by these 6 facts you didn’t know about Western Union.

Western Union didn’t start out as a fintech company. In fact, for the first 15 years of their existence, they were focused on sending telegrams. Western Union even installed the first transcontinental telegraph cable, allowing people on the east coast to communicate with the expanding Western United States. Looking for a way to connect North America to Europe by Telegraph, Western Union also sponsored an expedition to survey a route across Russian-owned Alaska and Siberia. As a result of their negotiating for land rights with the Russian government, Western Union helped broker the sale of Alaska to the United States on March 30, 1867. It wasn’t until 1871 that they added the ability to transfer money electronically to their services. 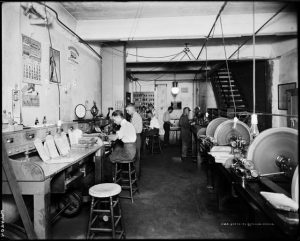 Modern money movers for over 145 years.

Starting in February 1871, Western Union’s network grew exponentially, allowing customers to send money between New York, Chicago and Boston using the Western Union money transfer services. By the end of the year, they had expanded nationally, successfully uniting the country through remittances. As their business continued to grow, they revolutionized how international money transfers work. In 1914, Western Union introduced the “Metal Money”, one of the first consumer credit cards. In 1989, they made paying bills easier by enabling customers to use Western Union to pay for auto loans, mortgages and other bills from thousands of businesses. Eventually, WU.com was launched at the start of the new millennium, allowing easy money transfers online from any device and around the clock.

For Western Union, it wasn’t enough just to connect people through simple messages. They were among the first companies to make sending text and images around the world accessible for everyone. In 1920, the company introduced the Telex network, a communication system that would allow users to exchange and print telegraphs using automated machines. One could almost say, this service was the pioneer for modern SMS as abbreviations like “<3” or “THX” were originally used to communicate via Telex.

Western Union has continued to stay on the cutting edge of technology thanks to the Western Union® money transfer app. Available in over 35 countries, the app makes it possible to send money on the go from virtually anywhere. And thanks to the MTCN tracking number you can track your transfer directly from your phone and know exactly when it arrives with your receiver. 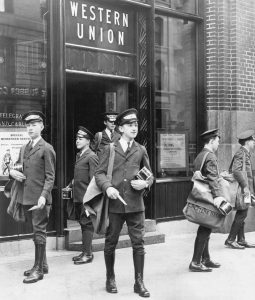 Sending money online or making direct to bank transfers have become some of Western Union’s most popular services, but what about people without bank accounts? Many of their customers don’t have access to financial institutions like banks where they live. Thanks to a network of hundreds of thousands of Western Union® agent locations, they provide people with the ability to send money to and receive money from over 200 countries and territories around the world. Additionally, their services allow customers to check exchange rates and make informed money transfer decisions from even the most remote locations.

By partnering with Western Union® agents globally, they were able to build the Global Scholarship program. Western Union provides scholarships valued at $2,500 (or the equivalent in local currency) for international in-need students in the field of STEM (science, technology, engineering, and mathematics) and business studies. This program enables high-potential students around the world to finish their post-secondary undergraduate education and enter the job market. In 2018, they introduced the newest generation of Western Union Scholars: 173 students from 64 countries who received a scholarship to pursue their careers and complete their post-graduate education.

Western Union is continuously supporting causes that are very close to the company’s mission and vision. Their global presence and network grant them the unique opportunity of making cash accessible to places where it’s needed the most. Through their work with diverse non-profit organizations, they’ve responded to catastrophes, provided immediate aid and helped to sustainably rebuild communities around the world. Since 2001, their Workforce Training, Scholarship Program, and Emergency Response have helped in 137 countries and reached over 940,000 people globally – and continues to strive to help others.

Throughout Western Union’s history, they’ve continued to find new ways to connect people around the world. From the early days of sending telegrams and stock market updates to their multilingual website and mobile app, they’re constantly looking for new ways to get people the money they need, when they need it. It’s been 168 years and they’re just getting started.

How technology shapes global migration: a conversation with Jason DeParle

The new graduate’s guide to finding a job, paying off loans, and saving money in the age...